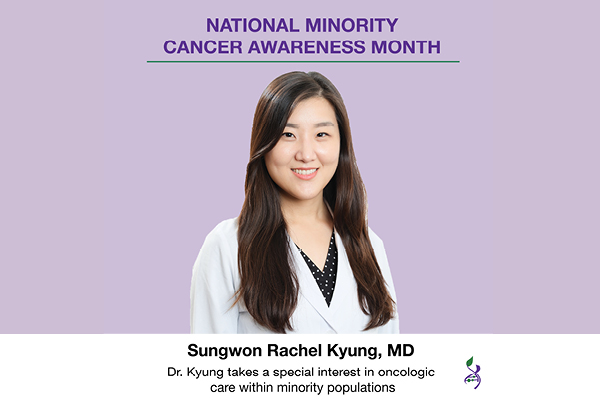 April is National Minority Cancer Awareness Month. It’s important to raise awareness about disparities in our healthcare system. Minorities are often more likely to get diagnosed and die from certain types of cancers than Caucasians, and there are a few different reasons for this. We spoke with Dr. Rachel Kyung and Dr. Lasika Seneviratne to get more information. Dr. Kyung takes a special interest in oncologic care within the minority population, especially with east Asian & Hispanic populations, since she is Korean in heritage and speaks both Korean & Spanish.

One example of increased cancer rates that Dr. Kyung is especially familiar with is gastric cancer within the Korean population. The East Asian population has higher rates of gastric cancers, colon cancer, and breast & lung cancer. Gastric cancer – also tied in with esophageal cancer – can be due to diet and environmental issues. It’s not a common cancer in America, but higher rates are detected within the Korean American population, and heavily detected in Korea, so much so that they have routine screenings to attempt to detect it early. A routine screening for this cancer would be an endoscopy every two years.

Their diet consists of certain ingredients that contribute to acid reflux, like

East Asians that migrated to America and became accustomed to the American diet are often less likely than East Asians who live in Asia to get this type of cancer.  However, East Asian Americans still have a higher incidence of gastric cancer than Western Americans, so there is likely an ethnic component as well.

Additionally, many cases of gastric cancer can be caused by untreated cases of H pylori, a stomach infection that can lead to increased inflammation and increased stomach acid. It is known to be a carcinogen (which causes all cancer). This can lead to chronic inflammation, which also leads to cancer. In addition to these diet and environmental factors, there could be a genetic component to this as well. H Pylori can be treated with antibiotics and would decrease the risk of cancer in this area.

There is also a higher rate of liver cancer detected in this population as well, most likely due to the higher rate of Hep B transmission in Asia, which often goes untreated.

Cancer within other minority communities

Though environmental and genetic factors take part in these discrepancies, there is still a disconnect within our healthcare system. The overarching issue is the lack of access to early care. Many of these groups do not participate in regular screening for cancer, which helps detect the cancer early and get ahead on treating it, increasing the mortality rate. Furthermore, insurance only covers screenings for certain types of cancers (mammogram for breast cancer, colonoscopy for colorectal cancer), and no regular screenings for other types of cancers, until the patient is experiencing symptoms. So insurance will cover an endoscopy for a symptomatic patient, but at that point, the cancer is often too advanced to get ahead of. So why don’t these groups visit the doctor sooner?

For immigrants, this may be due to a language barrier, so they have a lack of access to routine care, screening, delayed diagnoses, delayed presentations, and after they develop symptoms and the disease is advanced. In summary, lack of access to care can be due to:

Advocating for these communities

Dr. Kyung advocates for these communities with education. Educating patients and physicians about the importance of cancer screenings and doing her best to gain trust within these communities. At Los Angeles Cancer Network, we make it a priority to advocate for these communities. It’s a special focus for Dr. Kyung, Dr. Seneviratne, and the rest of the team at LACN to make substantial efforts to highlight these disparities, reach these communities and gain their trust. Our team is remarkably diverse, and we use this to our advantage when communicating with different groups. The team at LACN is aware of these disparities within our healthcare system and wants patients to know that we are here to advocate for them.

What Can Be Done?

For most cancers, the best way to reduce risk factors is to maintain a healthy lifestyle. This means limiting or eliminating alcohol and tobacco and maintaining a healthy diet & exercise routine. Never ignore any symptoms that may be a cause of something more serious, and educate yourself on your family health history and an increased risk that could be due to your racial background. Make sure to stay up to date on your vaccinations to avoid getting diseases that can lead to cancers. For example, the hepatitis B vaccination can decrease Hep B related cirrhosis and liver cancer. Similarly, the HPV (human papillomavirus) vaccination can decrease HPV-related cervical, vaginal, mouth/throat, anal, and penile cancer. Additionally, patients need access to routine care customized to their lifestyle and risk factors. Educating the public and raising awareness of these issues is the best to advocate for these communities. Lastly, don’t be afraid to share any questions and concerns with your physician.